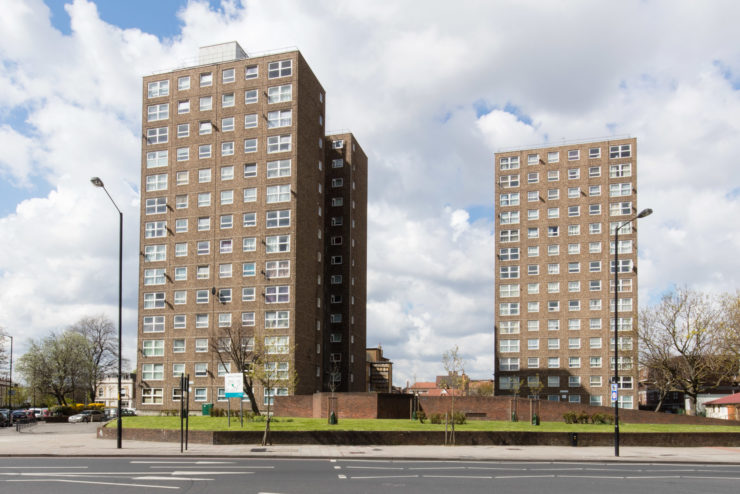 Built between 1968 and 1970 the estate is made up four 13 storey tower blocks. The towers are designed in a H-shaped footprint with the lifts and stairs housed in the central section and apartments housed in the two outer sections. The exterior walls on the housing sections have a beautiful exposed aggregate surface bringing a warm tone to the estate. Below the towers sat a disused underground residential car park which consisted of 60 garages. From ground level you are able to see the six large hexagonal and the 18 small triangular raised vents that fed light and fresh air to the garages. The garages became the initial home for the Livesey Exchange project, The project’s aim is to create workshops and studio spaces for businesses that would ultimately feed back into the local community through training, skill sharing and other activities. After a hugely successful crowdfunding bid, the project received backing from the council. Due to structural issues with the buildings the Livesey Exchange will now be situated at a new site on the Old Kent Road.

The blocks were built using the Large Panel System (LPS) or Plattenbau in the original German. The construction method used large prefabricated sections of concrete that would be brought to the site and bolted together. The idea was that the wall sections on each floor were held together by the downward pressure/weight of the floor above which meant no supporting frame was necessary.  This system was seen as a fast and cost-effective building method at a time of high housing demand in post war England.
On the 16th of May 1968, disaster struck when the newly completed Ronan Point, constructed using the LPS system partially collapsed following a gas explosion on the 18th floor.   The explosion blew out the load-bearing walls of the south-east corner of the building causing the four floors above to collapse downwards and the progressive collapse of the corner of the building. After the tragedy, works to strengthen all tower-blocks built using the LPS were to be carried out.

After the Grenfell tragedy in 2017 councils across the country conducted additional fire safety checks on all tower blocks. Residents of the Ledbury estate had been raising concerns about large cracks in the walls and floors of the buildings for years. These cracks, some reportedly large enough to fit a fist through, would allow a fire to easily spread through the building.  A structural investigation found a number of safety issues with the building including a risk of collapse in the instance of a gas explosion. It was discovered that Southwark council had no record of whether the strengthening work required after the Ronan point collapse had in fact been carried out on the Ledbury estate. The gas supply was cut off to the estate and residents were left without heating, hot water and cooking facilities until a makeshift solution was brought in.

After a long process of investigation and consultation with residents, it was decided to refurbish the estate instead of demolishing it. It has been common practice to demolish tower blocks with LPS issues rather than refurbish them, so this was seen as a bold move. Residents were given the option to move out of the estate with a guarantee they could return after refurbishment. A number of residents took this option while a few decided to remain in their homes. One of the four towers is currently unoccupied, meanwhile further structural investigations have discovered more major issues with the towers and the future of the Ledbury estate is in question again.

Find out more about the residents campaign here.