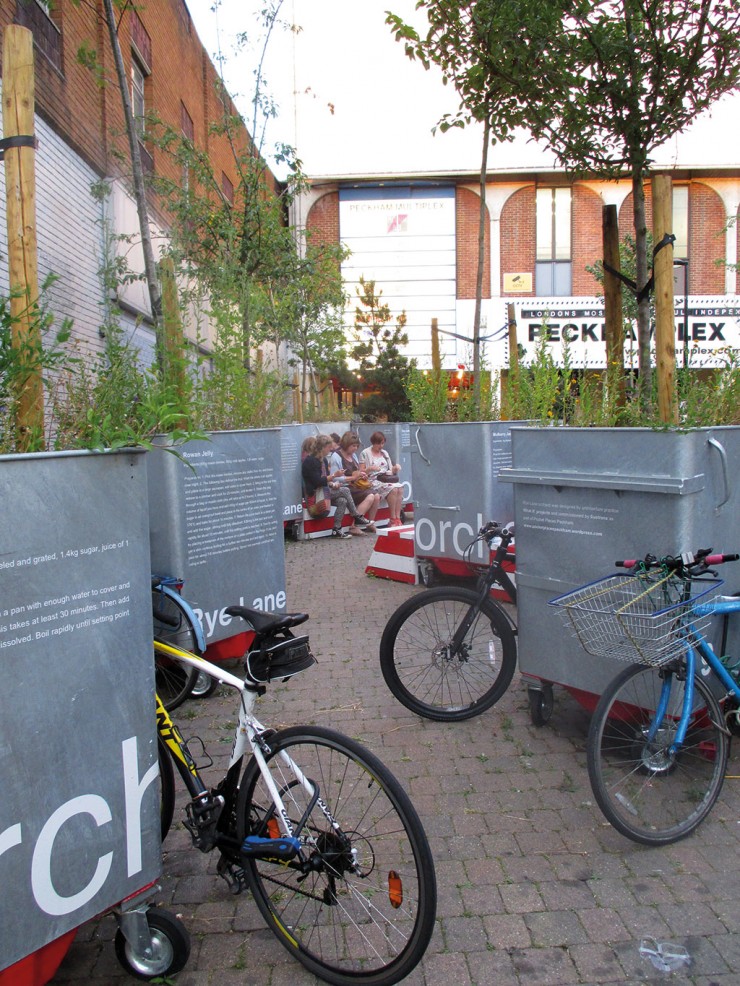 Nature, food and a bit of respite

Rye Lane orchard is the little sister of Octavia’s orchard, a temporary installation by What if: projects using 36 wheely bins as planters for fruit trees and meadows outside the Royal Festival Hall. Octavia’s orchard was commissioned in 2013 by the Southbank Centre in collaboration with the National Trust and as part of the Southbank’s Festival of Neighbourhood the orchard was offered for adoption to community groups in London for their own grounds. In response to an application from Peckham, 16 bins were donated to Pocket Places Peckham and installed in Moncrieff Place, an unloved area outside the Peckham Plex Cinema.

The metal wheely bins that were used at the Southbank went into hibernation on a vacant top floor of the Peckham Plex’s cinema and came out in the spring 2014 as Rye Lane orchard. Working with a group of volunteers over a period of two weeks new seating was made and painted in red and white stripes, 16 metal wheely bins were filled with soil, fruit trees were planted and wildflowers sown.

Traditional recipes on how to make quince salami, crab apple pie or Rowan jelly can be found below the corresponding trees encouraging the use of local resources and locally grown food. Peckham was well known for its market gardens until the nineteenth century. Melons, figs and grapes were all grown here. With the lack of refrigeration, food had to be grown close to its final market and Peckham was ideally situated to provide produce for the large London market on its doorstep.

Before the installation began on the site, the proposed seating for the orchard attracted a lot of criticism; it was predicted that seating would result in anti-social behavior and street drinking. Half a year later, local traders have confirmed that the seating has not caused any problem. The trees and benches continue to be maintained by the Peckham Plex staff. They water the trees, wipe clean the seating and bins and pick litter on a daily basis. Simone, the manager of the Plex points out that orchard has brought life to a very dead area. “It gave customers a place to wait or meet before a film. A lot more people from around here are using the benches for their lunch break.” The bins double up as much needed bike stands, an unforeseen benefit. Thinking about further improvements Simone suggests that more could be done to the hidden area leading into the Alley Way alongside the multi-storey car park where the real rubbish bins cause a problem.

But why are the trees in bins?

Octavia’s Orchard is inspired by the work of Victorian social reformer and founder of the National Trust, Octavia Hill (1838-1912) who, a century earlier, addressed problems of urban wellbeing and campaigned for open spaces in London.

The use of the galvanized bins typically used in multi-storey housing developments aimed to highlight the continued lack of access to green space in high density housing areas and the opportunities these neglected, forgotten and unloved spaces can offer to urban communities.

Ulrike Steven, What if: projects