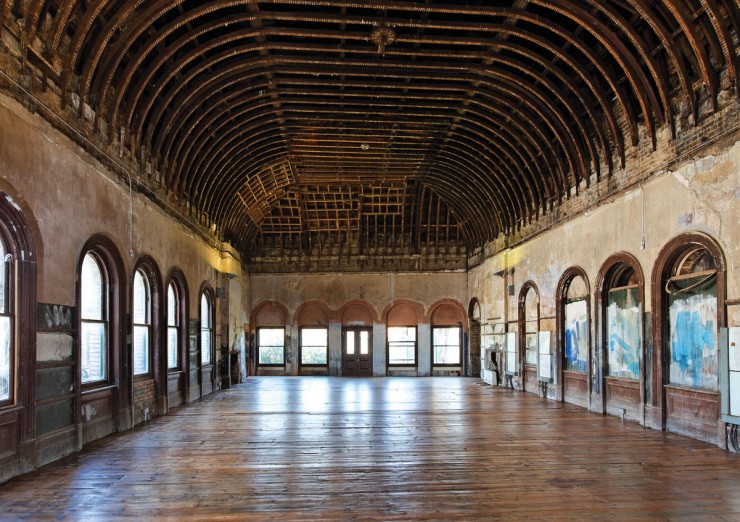 This article original appeared in the 2014 History issue.

Regular users of the station over the past few years will have seen some of its stunning original features emerging from under layers of green paint and pigeon droppings. From the semi-restored ornate staircase that the CoDesign Shop has been calling home for the past few weeks to the magically untouched gents toilets on the other side of the station, this gradual unveiling has been the result of many years of hard work on the part of Peckham Vision, the Rye Lane & Station Action Group and the Peckham Society.

Led by local architect and historian Benedict O’Looney, the original focus of the restoration was the Old Waiting Room between platforms two and three.

After a long stint as the staff recreation room and then as a public billiards room, it was sealed up in the 1960s and left forgotten. But in 2010, with the windows un-bricked and the floor repaired, it became possible to see how this space could be brought back to life. Four years on, the team behind the restoration are still campaigning, fund-raising and working behind the scenes to fulfil the room’s potential. So what does the future look like? Subject to negotiations with Network Rail over the lease, Peckham Vision hopes to turn the space into a profitable community-run enterprise as a multi-purpose venue.

Over the past few years they’ve been inundated with enquiries about hiring the space, so they have a solid business plan — but without a separate entrance from the station, access is only possible with the provision of a special temporary licence from Network Rail and the agreement of two rail companies and the station staff. With funding now in place to complete work on the staircase, the restoration is another step closer to becoming a reality.

It’s worth bearing these plans in mind when we’re considering both the history and the future of the space: if the station building is restored to its former beauty with a thriving multi-purpose venue at its heart, what should happen to the forecourt?

Would it change the way we think about the future of the arcade? What about lighting, seating and space for bikes?
While the two projects are totally separate they do share an important space in the centre of Peckham and they need to work together. I’m looking forward visiting the Old Waiting Room in the future.

But they need to get the stairs finished first.