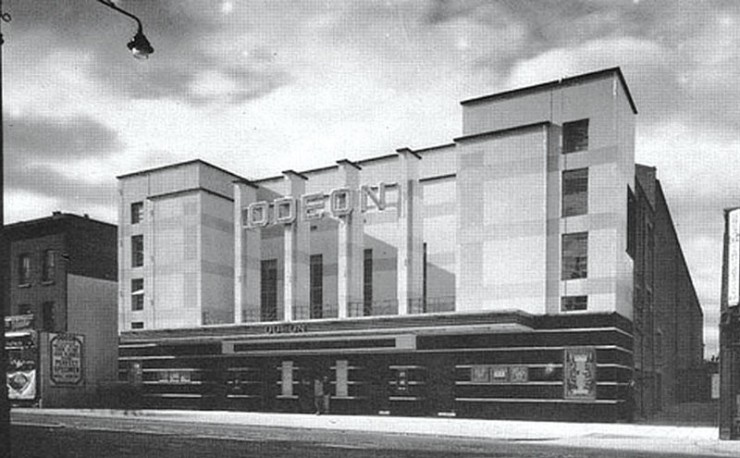 The central part of Peckham’s Rye Lane has a remarkable cluster of Art Deco buildings, markers of the commercial vigour and enterprise of Peckham’s business which made Rye Lane south London’s premier shopping destination in the late 19th and 20th century.

These buildings also wonderfully demonstrate how quick London’s commercial architects were to adopt the new modernist architectural culture making waves on the Continent and in the United States. Peckham’s Art Deco Quarter comprises more than six buildings in the central part of Rye Lane, with a further three demolished in the last decade along the Lane.

The central group in the Peckham’s Art Deco Quarter are the two-storey buildings surrounding Peckham Rye Station, the arcade and the three-story former department store on the east side of Rye Lane. These buildings were designed and built by the Southern Railway in-house architects under the direction of James Robb Scott (1882-1965). This team is perhaps best known for their striking Moderne-styled Surbiton and Richmond stations, which share some of the architectural detailing found in the Peckham Rye group. Robb was also the architect for Waterloo station, built a decade before. In this group, 10-16 Blenheim Grove have recently been refurbished to local acclaim. The distinctive horizontal masonry banding at the first floor, and the ‘Crittall’ windows, unite this group of buildings on both sides of Rye Lane fronting on to Station Way, Holly Grove and Blenheim Grove.

Rye Lane was a vital shopping area in the mid-1930s and this new ensemble around the Peckham Rye Station shows how the Southern Railway looked to intensify the use of their land around the station along with making significant changes to the Victorian station building. Between the completion of the station in 1865 and 1935, Rye Lane had evolved into a regional shopping centre. The development around the station reflects this change.

The most prominent member of the station group is the former department store at 117-125 Rye Lane facing the station arcade. This building is faced in Portland stone. Unfortunate recent overpainting obscures a jazzy chevron frieze at a high level. Tall flagpoles accented the building’s chamfered corner and central ‘towers’. 117-125 Rye Lane has been identified for facade restoration under the lottery-funded Townscape Heritage Initiative.

The ne plus ultra of Rye Lane’s Art Deco Quarter must be the 1935 extensions to Holdron’s department store, just south of Peckham Rye Station, at 135 Rye Lane. Like Jones and Higgins at the North End of Rye Lane, Henry Holdron ran
a successful department store, building it up from a single shop on Rye Lane in the 1880s: by the 1930s it occupied most of the east side of Rye Lane from the station south to Bournemouth Road.

By 1935 Holdron’s had been acquired by Selfridges, and they set about modernising the store. The fashionable modernist commercial architects T.P. Bennett and Sons were commissioned to look at a series of options for renewing and enlarging the sprawling Edwardian premises, which included two internal shopping arcades. Several designs were presented to the people of Peckham and the striking faience-clad building we now see on Rye Lane was the popular choice. This was the first phase of a plan to rebuild the entire Rye Lane frontage. The building is faced in buff terracotta over a steel frame. Inside this deep-plan building is a semicircular ferro-concrete vault that filled the middle part of the shop floor with daylight. This is soon to be restored.

This attractive red-brick building with cast stone detailing was one of the first Moderne-styled commercial buildings on Rye Lane. It created retail space, vertically, over several floors on an island site along the west side of Rye Lane. The design is by a Scottish practice that built a number of C&A department stores across the UK. There is a near-identical C&A building at 180-190 Lewisham High Street. (C&A vacated the Rye Lane store in 1971; it is now a McDonald’s restaurant.)

To northern extent of this Art Deco Quarter is marked by the elegant former Marks & Spencer at 54-58 Rye Lane. This building was designed by Robert Lutyens, the son of the architect Sir Edwin Lutyens. It façade is modern-style classicism and is formed from modular cast stone system which was used at a number of M&S stores across the country. Robert Lutyens is best known for his listed black granite Marks & Spencer on Oxford Street, built on the former Pantheon site. (M&S closed in 1990.)