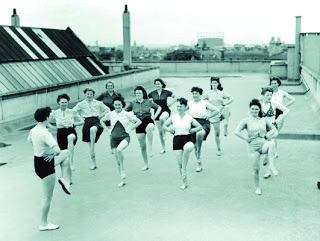 This CoDesign project isn’t the first time the people of Peckham have got involved in designing how we live. Between 1926 and 1950, the Peckham Experiment set out to study all the factors that contribute to health by observing members of the community interacting in a social setting.

The Peckham Experiment has been hugely influential in shaping understanding of the way to cultivate health rather than simply treating sickness, as well as informing the World Health Organisation. Visitors, inspired by the lessons from the project, come from all over the world to see the building in St Mary’s Road.

Run by husband and wife team, Dr George Scott Williamson and Dr Innes Pearse, the experiment was founded on the belief that, given the right facilities, communities would spontaneously organise themselves. They wanted to gauge people’s interest in informing and empowering themselves to promote individuals and family health.

950 families took part in the original experiment at the Pioneer Health Centre on Queens Road and thousands more attended the purpose-built centre that opened later on St Mary’s Road. Constructed to the designs of Owen Williams, it contained facilities such as a swimming pool and gym, a crèche, a library, and a rooftop playground.

‘Members’ were given access to information, medical advice, fitness facilities and social events as well as fresh organic produce direct from the Peckham Experiment’s dedicated farm. They were encouraged to be self-organising, and the Pioneer Health Centre became much more than just a ‘health centre’ in today’s terms — it was the social and cultural centre for the community.

It wasn’t by chance that the doctors chose Peckham as the home for their experiment. Then, as now, Peckham represented “a cross-section of the total populace of the nation with as widely differing a cultural a mixture as it is possible to find in any circumscribed metropolitan area”. Peckham reformers aimed to transform the city and sought to make “a full and energetic life possible in terms of urban existence”.

So, what was learnt from the Peckham Experiment?

The lasting legacy of the centre’s work is our understanding of the importance of environment for health and wellbeing. We now know that communities thrive when they have the means
to make their own choices.

Some of their key learnings are especially relevant to our CoDesign project:

The Peckham Experiment focused on health, but looking back on their achievements we can see that they created a thriving community around a space that people could use as they wished, encouraging mixed cultural activities and putting on formal and informal social occasions. But above all, they learnt that given the freedom to choose, people and communities usually make the right choices for their wellbeing.