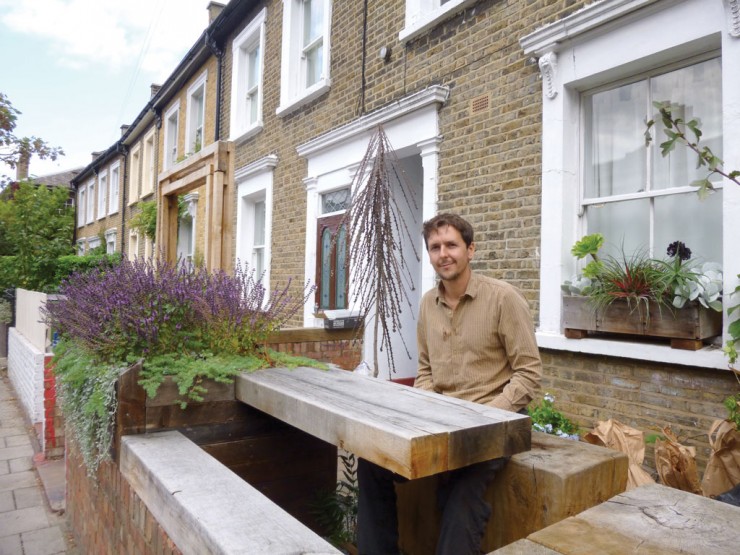 Daniel Corby Bristow is 32 and first came to Peckham in 2002, studying at Camberwell College of Art; living in Bellenden Road, Choumert Grove and Nunhead.  He has improved all of his landlords’ gardens whilst renting and designed the Derek Jarman Garden for Bold Tendencies 2013, on the multi-storey car park roof.  Dan was born in north Wales and has lived worldwide.

What first brought you to Peckham?

Before I came to study all I knew about SE London was the Camberwell Carrot!  I moved to Bellenden Road during its regeneration twelve years ago.  Friends asked why I didn’t live in East London but to me it was too cosy; Peckham was just real and a bigger mix.  As a student it was about finding big, empty, unused spaces and in Peckham they still existed, especially ten years ago, there were still lots of possibilities.  In East London all the money had already moved in and bought up all the warehouses but for a poor student, being in Peckham and Camberwell seemed like it was alive with opportunities, generating energy and ideas about spaces.

People change the area so it becomes very desirable and then can’t afford to buy there?

Yeah, Grayson Perry did a cartoon about the four stages of gentrification and it’s true.  What really annoys me is I spent so much time and effort trying to persuade friends that it was a nice place, it was sooo difficult to get them over for dinner parties – then as soon as this train line came in, I’ve had people on the phone saying ‘Oh, I’m in Tufnell Park at the moment but I’m thinking of buying in Peckham, where’s a good road?’ and I’m like, Go Away!  I was looking to buy two years ago but instead I took a plant hunting trip to Taiwan, since then it’s rocketed too high for me.

What changes have you noticed since living here?

Fancy cafes in Bellenden came and went, always felt a bit out-on-a-limb but now the floodgates have opened and East Dulwich people have moved towards Peckham.  I think the train line arrival in 2012 altered things overnight and people realised how good the connections were, amazingly central.  The demographic has changed, I couldn’t believe how many suits were walking past me in the morning last year in Choumert Grove.  That was quite a shock.

Are a lot of your clients here and has custom increased in the last 5-10 years?

Yes Peckham, Greenwich, Brockley and East London.  I love being able to get to my clients easily from here.  I used to work a lot in West London, but the clients were so aloof and really unpleasant, treating you like a servant; whereas ‘round here and Greenwich, people are really nice.  They’re not the ‘super rich’ in Peckham, who just want to spend ‘any’ money.  There are more people at medium budget range getting me to design their garden for about 15-20k.  Yeah, Peckham is definitely becoming more affluent but I love the mix of the Refreshment Rooms next door to the Nigerian club/bar.  I get a mix of white and black clients who’ve made money in property.

Do you think Southwark provides/maintains enough green space in the area?

Whenever I see a building plot I think wouldn’t it be great if there was a park there, even the mini ones could be utilised more.  It’s really nice just somewhere that’s set away from the road.  I absolutely love that little corner park, William Griggs’ Garden, like a village green.  What I would really like is more interesting street trees, not just London Planes.  There are so many amazing trees that could really inspire people, like the interesting bright red bark of the Strawberry Tree.  Snake or Paper Barked Maples are beautiful and can inspire people to think more about nature.

Palms are symbolic of Peckham, do you think the climate here is good for most things?

Yeah you do get away with growing more stuff in Central London, it’s the heat island effect.  The closer you get to Central London the hotter it is because of all the concrete and stone that gets warmed by the sun, then slowly releases the heat.  Also the density of buildings and exhaust emissions add warmth in Winter.  It makes a huge difference, it will always be at least 3°C warmer than outer London.  Harsh winters will kill off tropical stuff.  Banana plants are one of my favourites which have fruited this year, amazing exhuberance and exoticism.

You’ve travelled extensively, so why stay in Peckham?

London is a real microcosm of the world and definitely the most diverse city I’ve ever been to.  Peckham doesn’t feel like it’s awash with money, which is a nice feeling… I like it when things can be challenged, rather than gentrified or stagnant.

What would make you want to move?

I’m a country boy at heart and bought some woodland to build in Wales, where I want to implement my architectural ideas.  If Peckham had still been affordable I may have bought somewhere and stayed longer but it was an excuse to move on.

What do you think about proposals for the station square?

I love the square idea and taking out the units but don’t think it should be a huge, mega project; or that something should be imposed on the area that isn’t fitting.  Rents should be affordable and have a bias towards independent retail, rather than multi-nationals which would just make the area soulless.  I feel really strongly about that, it would be awful if it got done really glitzy and was just all Costa Coffee and Fat Face, y’know, we can go to Covent Garden for that.  Hopefully it can be something done on a more organic scale.

How would you landscape the square if you were asked?

Are you asking me to pitch?  It should have loads of character, be interesting, different, with lots of ideas and not look like the standard, lowest common denominator public square, with all the same planting and benches as everywhere in the city.  I don’t think it should look like a computer design either, like a lot do.  It should be definitely designed without looking like a hodgepodge but it shouldn’t be really slick and corporate looking.  It needs to have vibrancy, colour and interest, scent and water – real energy to it, which could quite easily be achieved.  You can get small trees to go along Rye Lane, maybe I’d put things like the Golden Rain Tree, Indian Bean Trees would be amazing, or Foxglove Trees.

Yeah the rubbish is a bit upsetting, there should be a plastic bag charge but also it would be nice to have more variety of shops on Rye Lane; they do basically fall into three different categories – fish, meat, nails…

What makes you smile the most about Peckham?

Seeing local kids playing in the street and inventing games to play, laughing.  I love that, on Blenheim Grove.  I don’t think everything should be segregated and prescribed in terms of kids’ play areas, they should be able make their own fun and use things how they want, not everything covered in cotton wool.  Also I did the garden at No.7 Choumert Grove because I was inspired by the locals talking to each other, it’s more alfresco and mediterranean style, for sitting in your front yard chatting with the neighbours, I love that and you don’t get that in other parts of London – in Peckham that really does happen.

Photos and Interview by Michelle Male Shaw on 26.09.14