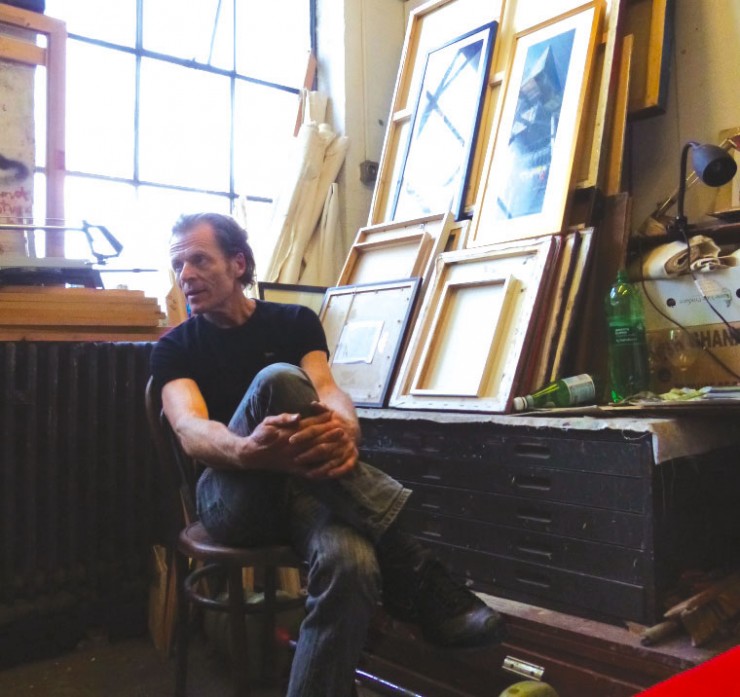 Name: Mark Pearson,
Born 1956
Occupation/Link with Peckham: Artist – rents a studio in Bussey Building
Live/Work locally, where: Lives Lyndhurst Way
Born: in Lewisham, raised in Mottingham near Eltham
For how long: Lived here 22 years, had studio for 12 years.
Who lives with you: Wife and daughter.
Date of Interview: 13.09.14
WEBSITE: http://www.markpearsonartist.com/mpa/

What first brought you to Peckham?

Affordability – getting a family house, my wife Nics was pregnant with Lucy, we needed a garden, grown up stuff like a mortgage. Peckham was a really good place then (22 years ago) for cheap houses, we were previously renting a council flat on the Glebe Estate, Camberwell.

Good train links were a big reason to live in Peckham as Nic worked in Camden. Peckham was better than Camberwell for links, sometimes you’d give up getting out of Camberwell cos the A2 was always blocked.

Would you call yourself a successful artist now?

I’ve always sold work – young people will buy paintings now, art is much more accessible. When I was at college I did various jobs to supplement, like grave digging, park keeping, a dress chef in a nouvelle cuisine restaurant in the 80’s.

What would you complain about in Peckham?

When I first moved here we were losing a lot of stuff really quickly without notice. A couple of the really nice (West Indian) pubs were turned into flats, there was an air of the community feeling being lost. There are only 2/3 neighbours in my street I still know – it’s different in the last 5-10 years. But before it was pretty rough and ready here – it could be intimidating for my daughter to walk along Peckham High Street in her school uniform about 15 years ago, there were certain pubs she wouldn’t walk past. All of that’s changed – the Monty (Montpelier Pub) was always pretty derelict and the Wishing Well (now the Victoria Inn) was really, really boisterous like a cowboy western, I liked it a lot, people always piling out onto the street.

Blenheim Grove was really bleak, there was nothing down there but as soon as Bar Story came along it was like a beacon of light, cos there were always people around then, when the dark nights came…. it was great when that opened.

Are you aware of the previous proposals for Peckham Rye Station?

I was worried about the back – I saw a proposal (Dovedale Court) and it looked really, really severe, I didn’t like that at all. The rows of glass boxed shops are the worst idea anyone could ever have. The railway arches are big enough to be cannibalised into lots of smaller businesses but that limits the space to similar usage, when the arch is big enough for a light industrial unit and down the end you get all the painters and the potters; they’ve been going for years before me. The arches are great for changing into things like Bar Story. To split them up and start redesigning them would be a bad idea – let people keep the character of the arches and experiment with different stuff down there, not control it too much.

Do you like the industrial use in the back?

I like the steel yard. Nothing better when you’ve missed your train than lookin’ over the steel yard, listening to their radio, which is always blarin’ out and watchin’ is just great…. and I’ve not painted it yet but I’m gonna build up to it and you can give ‘em a wave, they’re friendly! You know what I mean, it’s great….. there’s nothing wrong with the steel yard. I watched them make a fantastic set of stairs, from the London Bridge platform, for about six months – made from the first step into this beautiful thing,… you won’t get that in a little glass box.

Do you know about the proposals for the square at the front of the Station?

I like the idea of the square, I feel sorry for people who will lose their businesses there like fruit shops, cafés and hairdressers which I love, but I can understand how that can be improved and it’d be really nice, the open space will be really utilised I think. I didn’t know about the other proposals for taller buildings but it’s vital that the council now want community interaction cos I think seven storeys will block the light and be too imposing – when they said about a square I assumed in my naivety that they were just gonna reproduce the Victorian square, with low rise around it.

Is there anything else you want to say about Peckham?

Rye Lane is a strange beast, it really works on so many levels but when that pub closed half way down there they just let a betting shop go straight into it, which was a pain. Other than the Bussey Building and the club that opens up late that’s the only sort of action going on in that road and it would be better if there were some sort of shops that were applicable to visit after nine, cos after that it’s like a ghost town, everything shuts down.

There are a series of interesting, weatherproof photographs of the recesses of Rye Lane where you can really see the changes of the history of it. Gobsmacking images of the 50s and the 60s, C&A…. obviously it was a really buzzing shopping centre at one point. It has been really neglected. My nan used to say ‘Oi I could use a day out in Peckham’. The architecture was really beautiful and has been really neglected and been allowed to cannibalise itself, though it does add to the charm. Though you get heaps of pound shops, a reflection of all the high streets in Britain.

There used to be a little Peckham market, much more up and runnin’, 30-40 stalls but there’s only about 3 now. Just like Brixton’s got one, Peckham needs a really good market. A weekend market to start with would be good. I could see it in the station square. At the moment stalls are dotted around each street and I don’t think the covered markets/arcades are fully used either, I run out of the rain into ‘em, but I do like ‘em.

The artists in the Bussey Building use the local wood yards like Whittons Timber. Peckham Glass used to be called Dr.Pane!

It’s great to be able to walk to shops in Peckham as I don’t drive. We need a really good art shop. I use the pound shops for screws, glue, turps, gloves, everything and local shops all the time. I like the fact that you get to know people in them and they’ve cottoned onto what people want, they even sell canvasses in there and DIY stuff. I don’t need to go to Dulwich any more for hardware, I just go straight downstairs – really good. They have really wild Christmas decorations as well. There are shops in Peckham that don’t take their Christmas decorations down, which I quite like…. a touch of tinsel in June is a good thing.

Do you intend to stay here?

Yeh totally, they’re not chasing me out. I really like that this (Codesign) has aroused people’s feelings, to make the council committees survey people, that’s because people care about the place, they don’t want it ruined and it’s nice that they wanna do that. My daughter refuses to leave home cos she loves Peckham, it’s got something.

What might make you want to ever move away?

Riots don’t bother me. Gentrification, in the sense that people making corporate decisions about places where they don’t live, would do me in a bit. This place (The Bussey Building) being cleaned up and modernised would be horrible – really evil! Faceless bureaucrats muckin’ it up who just don’t get it.

With reference to the process of gentrification – in part evolving from artists moving in, bringing slowly more media acclaim, then the developers knocking on your door – do you ever think about your responsibility as an artist?

I do because I could easily be priced out of Peckham if they put the rents up a lot. I’ve had other studios in the past but this is the only one located where I live and I can meet people who buy my work locally, which is weird cos in the gallery system I never meet people who buy my work, I just get told when something’s sold. When I paint on the street in Peckham, people really like having the creativity around them and it would be a shame to lose that. It’s a fine balance. Studios are good in Peckham cos you don’t have to work alone at home.

It’d be horrible for gentrification to happen and it probably will in the end, cos house prices are so ridiculous. I think it’s started to happen in the last 10 years. Me and my wife couldn’t afford to buy the house we’re in now and my daughter can’t afford to rent in Peckham.

I’ve noticed it starting with the gate house in our (Bussey) building getting done up – it’s like the writing on the wall.

In one word or sentence what would make you smile about Peckham the most?

It’s just really friendly and approachable. In my job you’re on your own a lot but you can just go outside and there’s loads of people to talk to, it’s really nice. There’s always bad elements about everywhere but the vibe here’s nice. On a warm summer’s evening it’s a delight to walk about, there’s never ending sources of inspiration.